WHILE FOCUSING ON ADVOCATING FOR THE BENEFITS OF WEIGHT TRAINING, today’s post is going to discuss the intended therapeutic results of several alternative therapies. Sports therapy, like many kinds of physical therapy is known to look deeper into muscle functions. As any athlete will tell you, STRETCHING is a crucial part in reducing injury and maintaining steady muscle development. One method of stretching adheres to the Basic MET Protocol.

Muscle Energy Technique (MET) was developed in the United States of America by Osteopathic physician F Mitchell Sr. who first described MET in 1948, following exposure of fellow Osteopath, TJ Ruddy. Ruddy encouraged patients to actively participate in mobilization and manipulative procedures, rather than those processes being purely passive. Refinements of the methods were later developed by Mitchell’s son, F Mitchell Jr., as well as Czech physician K Lewit, who worked to minimize the amount of force employed as well as the direction and duration of isometric contractions: the basic MET precursor to subsequent movement or stretch. MET has been refined and systematized since and has continued to evolve with contributions by male practioners from different professions, mainly in the treatment of shortened or weakened muscles and restricted joints. (A recent revival n the interest of Ruddy’s early 1950’s work has led to the development of rhythmic, ‘pulsed’ form of MET that offers benefits of regular MET together with proprioceptive rehabilitation [Ruddy 1961, Chaitow 2006]

In its period of early development the mechanisms operating when Muscle Energy Technique (MET) were employed, were ascribed to either post-isometric relaxation (PIR), affecting the tissues that had been contracted isometrically, or reciprocal inhibition (RI) affecting the antagonists to the tissues that had contracted. PIR and RI are now seen to only partially explain the benefits of MET [Fryer & Fossum 2009] Instead, the term ‘increased tolerance to stretch’ has been coined to describe (but not to explain) the increased ease with which relatively pain-free joint and soft tissue motion is achieved following mild isometric contractions [Fryer 2006]. MET has two simultaneous therapeutic objectives, first being pain modification. This is partially achieved by nociceptive inhibition, via both ascending and descending neurological pathways, following activation of muscle and joint mechanoreceptors during isometric contractions. At the same time, muscle contraction stimulates fluid flow so increasing drainage from interstitial space, reducing concentrations of pro-inflammatory cytokines, endogenous pain-inhibiting substances are released, including endocannabinoids, enkephalins, and endorphins [McPartland 2008]. A second primary objective of METinvolves enhanced mobility, and one mechanism where by this is achieved relates to the stretching of the series of elastic components of sarcomeres during isometric contractions, increasing their length, particularly if the active or passive stretching follows after MET[Lederman 1997]. A further mechanism involves reduction in the fluid content of fascial structures following muscle contractions, leading to temporary increase in the case of movement of associated muscles or joints [Kingler et al 2001].

Muscle Energy Technique is defined as a form of soft tissue treatment in which the patients muscles are actively used, on request, from a precisely controlled position, in a specific direction and against a distinctly executed therapist-applied counterforce. The key defining element of MET is the use of an isometric contraction before subsequent stretching or movement of restricted tissues. MET is used to treat soft tissue or joint dysfunction, usually as part of a sequence of modalities, but sometimes alone. Some MET variations utilize isotonic ecentric contractions, where tissues are slowly stretched during the contraction. Variables include: The degree of force used in the isometric contraction, the length of time being controlled (for example five seconds or less than a second), the direction of the applied force (for example, towards a restriction barrier or away from it), the degree of movement or stretching following the contraction, (whether the altered position achieved is sustained or brief), and how many contraction repetitions are involved. Certain aspects of MET can be taught for self-application.

A basic MET protocol is as follows:

You may meet therapists who ask a client to contract a muscle for more than 10 seconds or who wait a couple of seconds before performing the stretch. Many hold the client’s limb in the final stretch position for some time, encouraging a gentle relaxation of soft tissues. There are many variants on MET stretching and I encourage you to experiment to discover what works for you.

“Alternative medicine is any practice that is put forward as having the healing effects of medicine, but is not founded on evidence gathered using the scientific method. It consists of a wide range of health care practices, products and therapies.” (Google)

Below are descriptions of and links to external sites offering several types of alternative therapy/ strength building practices:

Hyperbaric Oxygen Therapy (HBOT) is a medical treatment which enhances the body’s natural healing process by inhalation of 100% oxygen in a total body chamber, where atmospheric pressure is increased and controlled. It is used for a wide variety of treatments usually as a part of an overall medical care plan.

Myofascial Releases are soft tissue therapies and massages for the treatment of skeletal muscle immobility and pain. Myofascial Release has exploded on the therapeutic scene with an unprecedented impact and is recognized as the most effective form of healthcare therapy.

Cranial Sacral Therapy (also known as craniosacral therapy) is a gentle, noninvasive form of bodywork that addresses the bones of the head, spinal column and sacrum. The goal is to release compression in those areas which alleviates stress and pain.

Cranial sacral therapy seeks to restore the natural position of the bones and can decrease  stress from chronic injuries as well as provide relief from migraine headaches, neck and back pain, temporomandibular joint disorder (the inflammation of the joint that connects the lower jaw to the skull) and more. 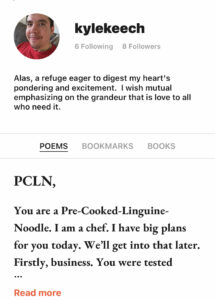 Want to join me in supporting a good cause? I’m raising money for IM ABLE Foundation.

Your contribution will make an impact, whether you donate $5 or $500. Every little bit helps. 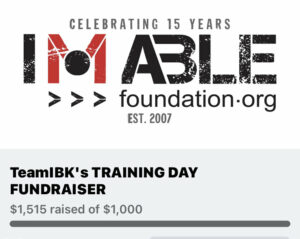